Whether or not electrons confined to two dimensions conduct electricity when the temperature approaches absolute zero remains a subject of intense research and controversy. It is well established that the “metallic behavior” is stronger in systems like silicon where valley degeneracy enhances interactions. However, little is known about the role of valley splitting and inter-valley scattering, two processes associated with valley degeneracy. After demonstrating that valley splitting could be electrically controlled in Si quantum wells on insulator (SOI), we have recently shown that valley splitting suppresses the metallic behavior in Si. Here, we have addressed the problem of inter-valley scattering which has previously been disregarded because of the lack of theoretical description.

We have implemented a recent theory of weak-localization magneto-conductivity (MC) with inter-valley scattering (see Kunstevich et al. in Phys Rev B (2007)) to extract the inter-valley scattering time in our sample. Doing so not only allows us to demonstrate that the metallic behavior can be observed even in presence of strong inter-valley scattering, but also to show that this observation can be quantitatively explained by the interplay of electron-electron interactions and weak localization. Interestingly, weak localization is canceled by the diffusive part of interaction corrections to conductivity leaving a paradoxical linear ballistic like temperature dependence which had remained largely overlooked but is now clearly explained.
More importantly, our analysis reveals that interactions are much stronger in SOI due to the reduced screening. This could lead to a renewal of the subject as it should allow reaching regimes of interactions which were previously unaccessible experimentally in Si. 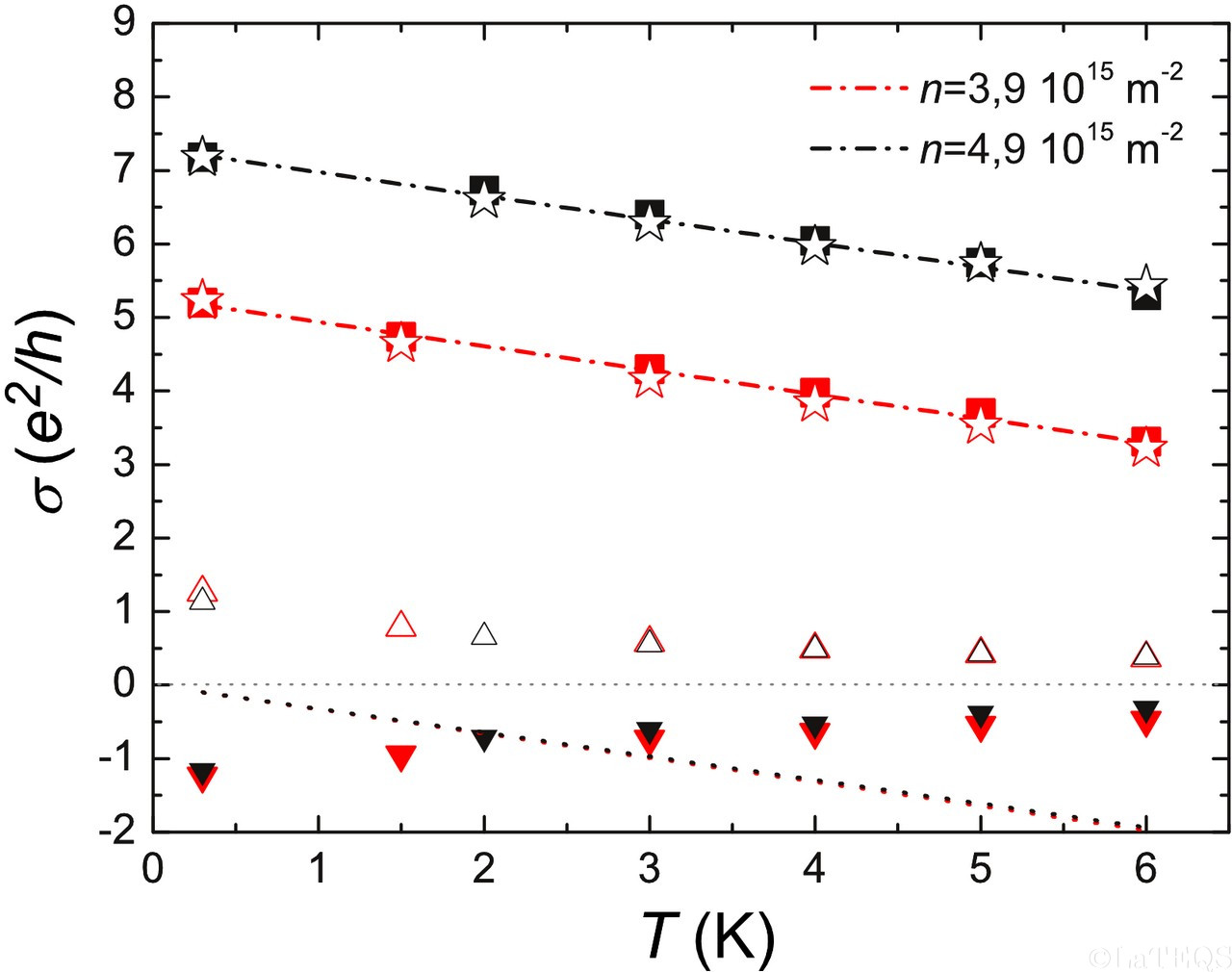 Valleytronics is rapidly emerging as an exciting area of basic and applied research. In two-dimensional systems, valley polarization can dramatically modify physical properties through electron-electron interactions as demonstrated by such phenomena as the fractional quantum Hall effect and the metal-insulator transition. Here, we have addressed the electrons’ spin alignment in a magnetic field in silicon-on-insulator quantum wells under valley polarization. In stark contrast to expectations from a non-interacting model, we show experimentally that less magnetic field can be required to fully spin polarize a valley-polarized system than a valley-degenerate one. This is illustrated in the above figure which displays the resistance of the 2DEG in a Silicon on Insulator quantum well. The field of full spin polarisation is achieved when the resistance saturates and is indicated by a red point. For low density (Panel a), the field of full spin polarisation decreases as valley polarization is increased. These observations are quantitatively described by parameter-free ab initio quantum Monte Carlo simulations. We interpret the results as a manifestation of the greater stability of the spin- and valley-degenerate system against ferromagnetic instability and Wigner crystalization, which in turn suggests the existence of a new strongly correlated electron liquid at low electron densities..

Spin is crucial in determining the nature of the two-dimensional electron system (2DES). Lifting spin degeneracy by applying an in-plane magnetic field first dramatically increases the resistivity and second, tends to drive a metallic system into an insulating one (MIT). Experiments had suggested that this is the case regardless of valley degeneracy, being observed in valley-degenerate systems such as Si-MOSFETs as well as non-valley-degenerate p-type GaAs. The detailed phenomenology is, however, more complex and has yet to be fully understood. It might be expected that the role played by the valley degree of freedom is, in essence, equivalent to that of the spin degree of freedom. This, to some extent, has been demonstrated in recent experiments in AlAs quantum wells in which a valley splitting is induced and tuned by applying symmetry breaking strain. These experiments showed that for certain fixed electron densities, spin and valley both need to be polarized before insulating behavior is observed in contrast to previous experiments in silicon where lifting only the spin degeneracy is sufficient to induce a transition to insulating behavior.

This indicates that other parameters must also be at play. Electron density and disorder are both already known to be vital and call for these to be examined in conjunction with spin and valley degrees of freedom. Here, we have addressed the temperature dependence of the resistivity in silicon-on-insulator quantum-well structures in which the valley splitting can be swept electrically, in addition to, and independently from the electron density. We have found that increasing valley polarization increases resistivity, and strong metallic temperature dependence is suppressed, although incompletely, depending on density (see the figure). Furthermore, upon crossing the valley partially polarized–fully-polarized boundary, our data reveal an insulating contribution to the resistivity arising from the upper-valley-subband edge. We hypothesized that this may be due to scattering induced by localized magnetic moments in the localized tail of the upper valley subband via a Kondo mechanism. In turn, our results suggest that in parallel magnetic field experiments of valley-degenerate systems, localized valley moments may scatter electrons in the lower spin subband via an analogous mechanism which may provide an avenue for understanding some of the unexplained phenomenology. Read more in K .Takashina et al. Phys. Rev. lett. 106, 196403 (2011) 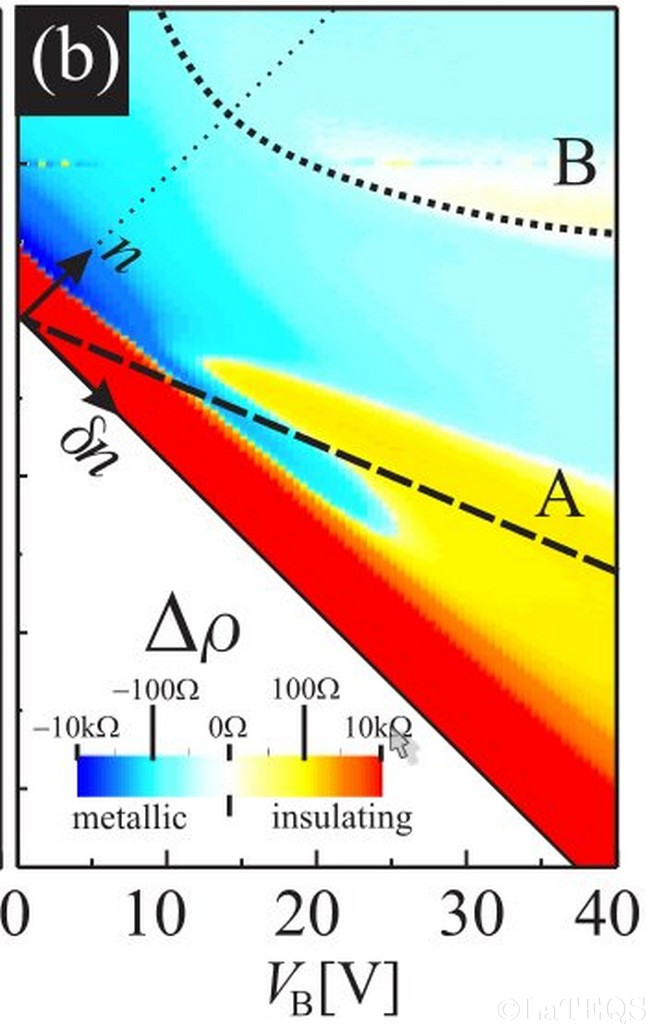